Own the Remote: 5 Tips for Taking Charge of Your Kid’s TV Time 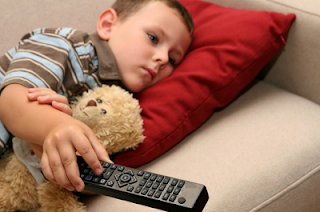 Do your children morph into couch zombies after school? Does it take everything you have to wake them from their television trances? Are you battling the TV for your kids’ attention and affection Parents can teach their children healthy television viewing habits by following five tips for establishing the rules of the remote.

Children lack the maturity necessary to distinguish between age-appropriate content and that which is not. It’s up to mom and dad to lay down the law. Be clear about the rules regarding programming that is violent, sexually explicit or not in line with the family’s values. Most cable companies offer a channel blocking service to control what type of content or which channels an unsupervised child can access. Taking advantage of this feature where available is highly recommended.

Establish times during each day or each week that the television cannot be in use. For example, declare the dinner hour a TV-off time. Restrict television use on weekdays between four and six to allow for completion of homework. Proclaim every Monday to be a no-TV game night. Set a time, maybe 9 p.m., at which the TV is shut off for the remainder of the evening.

This amounts to eliminating televisions in bedrooms. It’s hard to monitor what and how much a child is watching if they are in their room with the door shut. Situating the television in an open, shared room of the house enables parents to exert more control and influence and discourages children from the temptation to view off-limit shows.

Set aside one evening a week for the family to view television together. Allow kids to share in the selection of programs under adult guidance. Later, spend some time discussing what was watched. Ask open-ended questions to determine your child’s understanding and interpretation of the content.

A television playing to an absent audience is at best noise pollution and at worst a drain on the pocket book. And the passing child who has no intention of turning it on may unwittingly get hooked and hypnotized. If no one is watching, turn it off. The silence inspires clearer thinking. Give your home and family some quiet time to share and talk together without the distractions of outside media.

How to Use Hashtags to Increase Students’ Interest in Reading

5 Technological Tools Teachers Are Using To Connect With Your Kids